We will begin our acquaintance with the ship from the twindeck, a space located under the main deck. 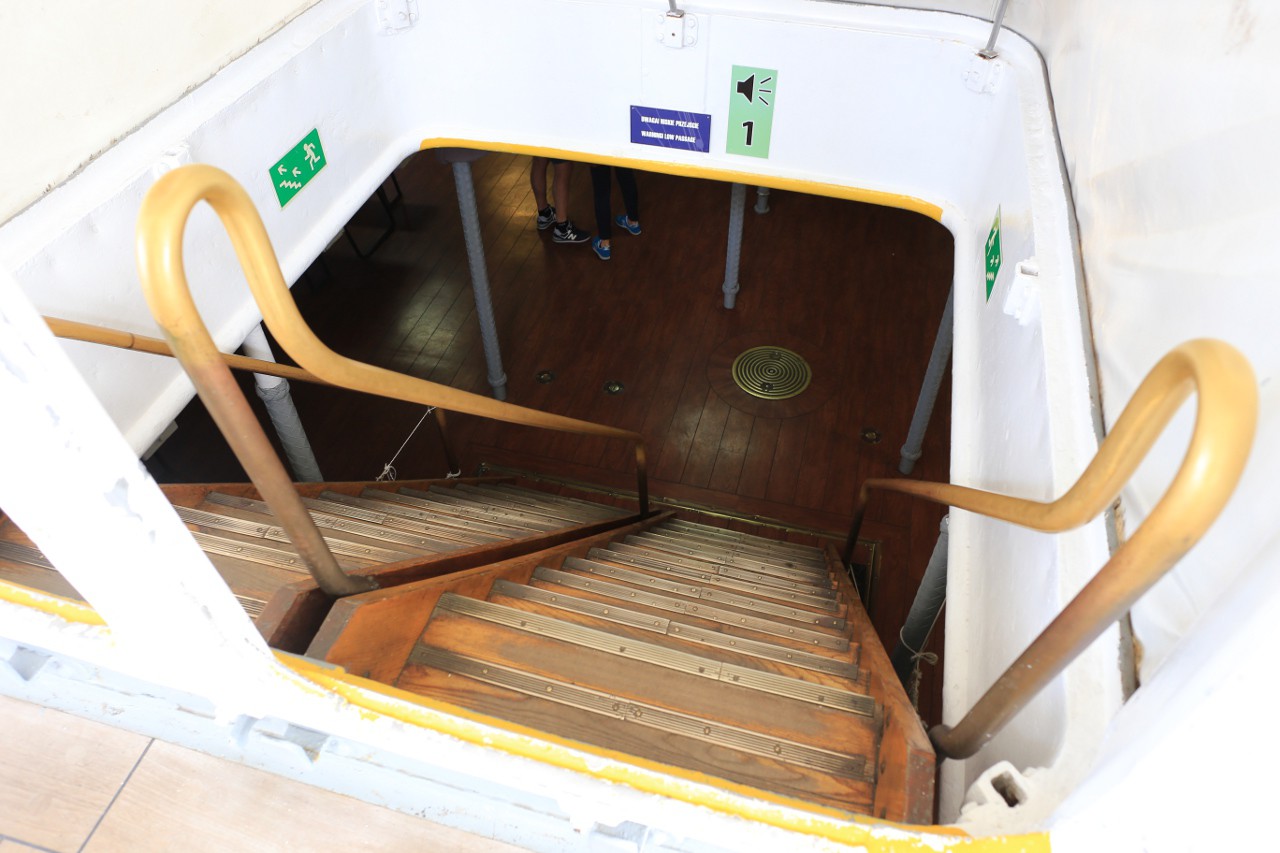 This vast room was a large forecastle for the cadets. Here they slept in hammocks, which were hung on special hooks, and during the day they were removed, rolled up and taken to the deck, where they were placed in special hammock nettings for airing. 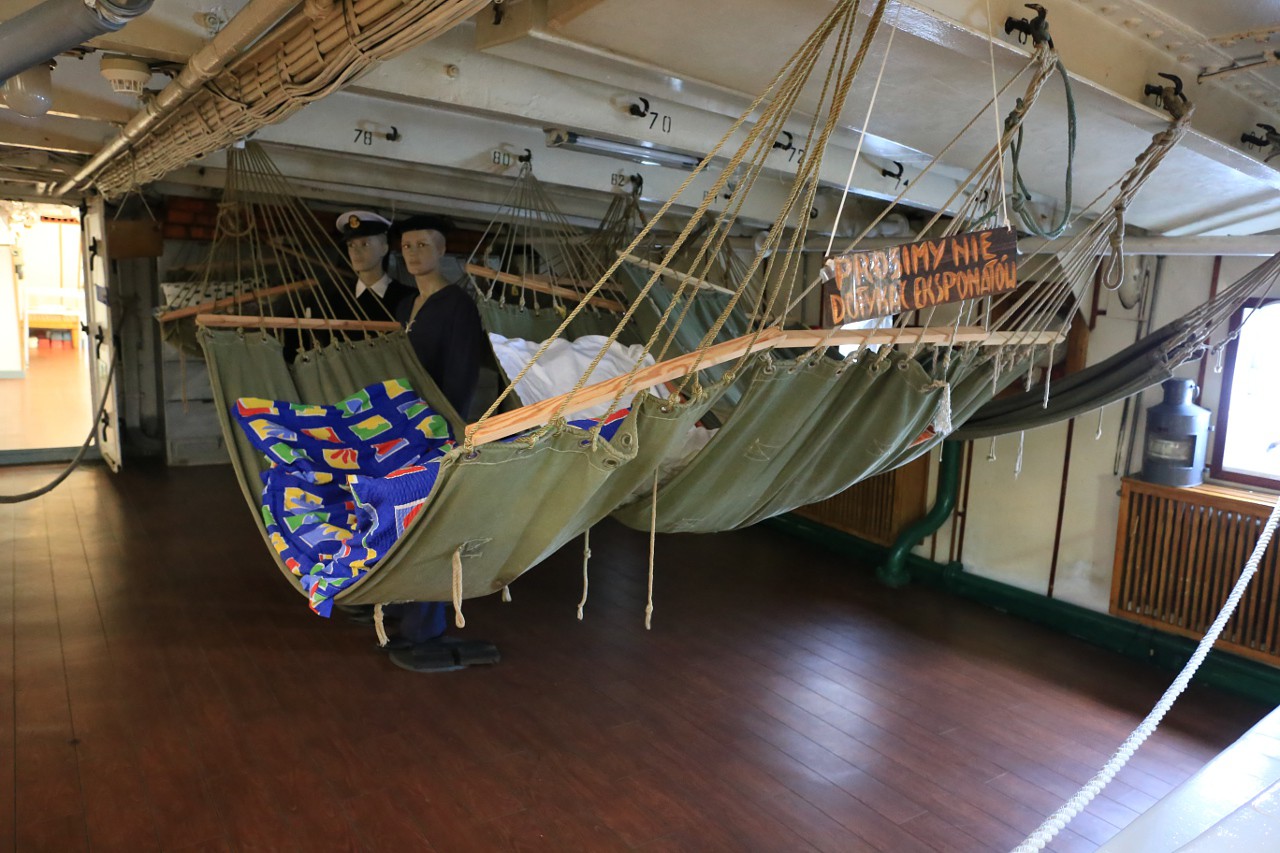 During the day, the twindeck was a classroom, and the cadets ate their meals there. 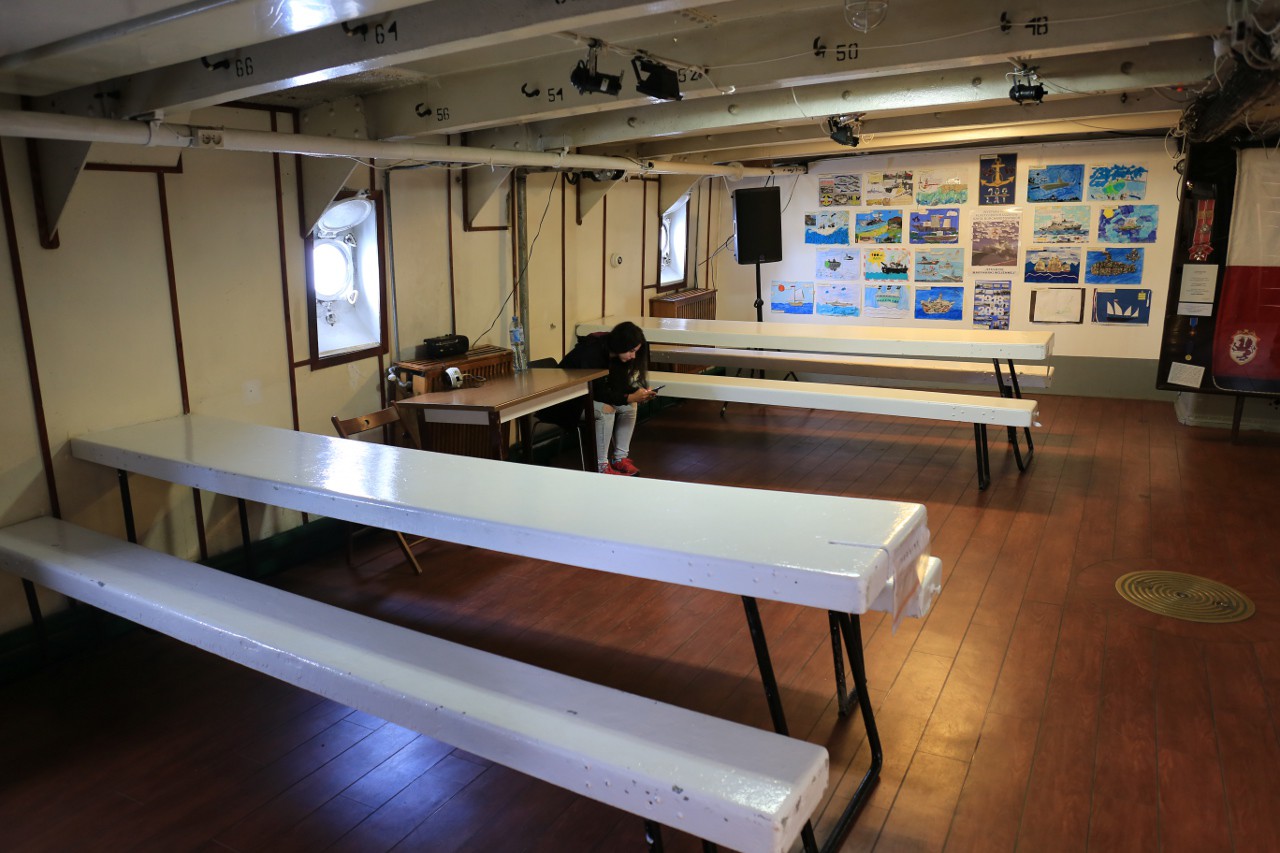 Now the Museum of the history of the ship is located in tvindek. 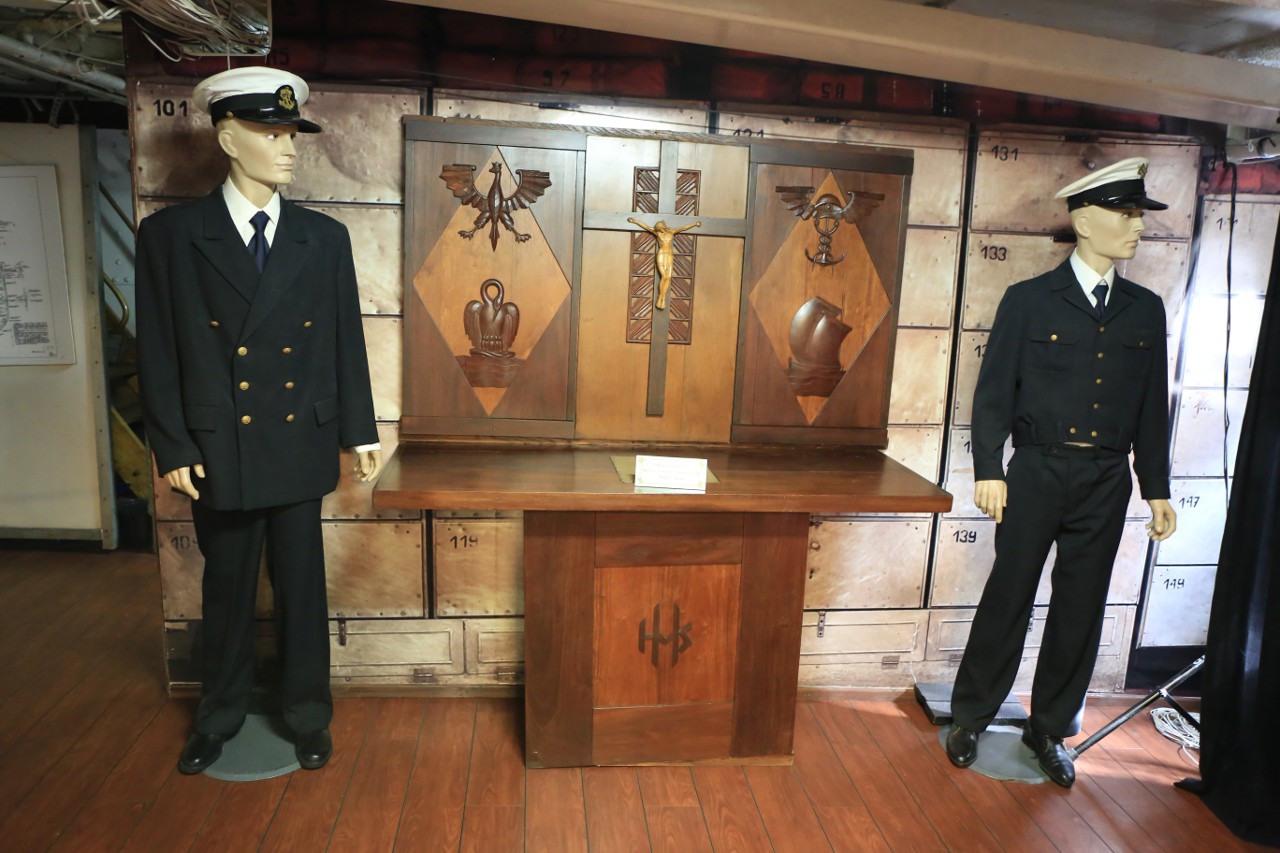 The history of the ship began on March 9, 1908 at the Blohm & Voss shipyard in Hamburg, where the keel of a three-masted sailboat was laid under the construction number 202. The construction was commissioned by the German merchant marine school (Deutsche Schulschiff Verein). 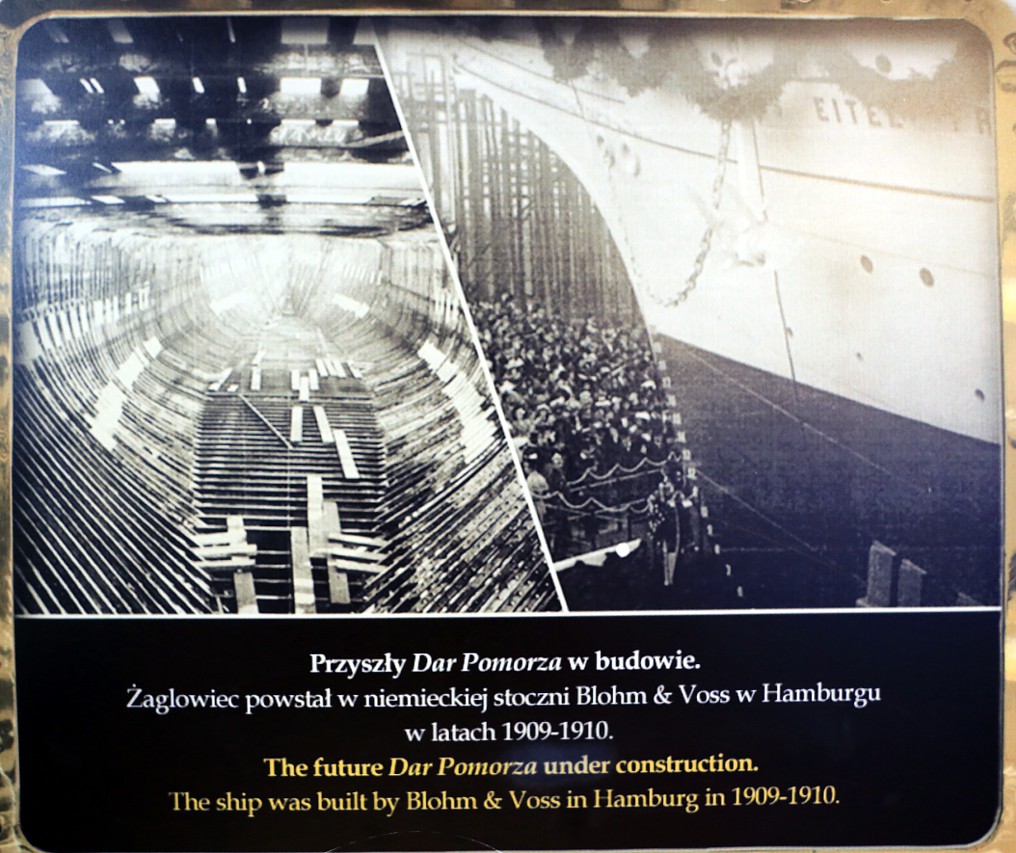 The ship was launched on 3 April 1909, and in October was commissioned as a training ship under the name Prinzess Eitel Friedrich. The ship made two trips a year - in the summer in the seas of Europe, in the winter went to the Caribbean. After the end of the First world war, according to the provisions of the Treaty of Versailles, the sailboat was transferred to France as reparations. 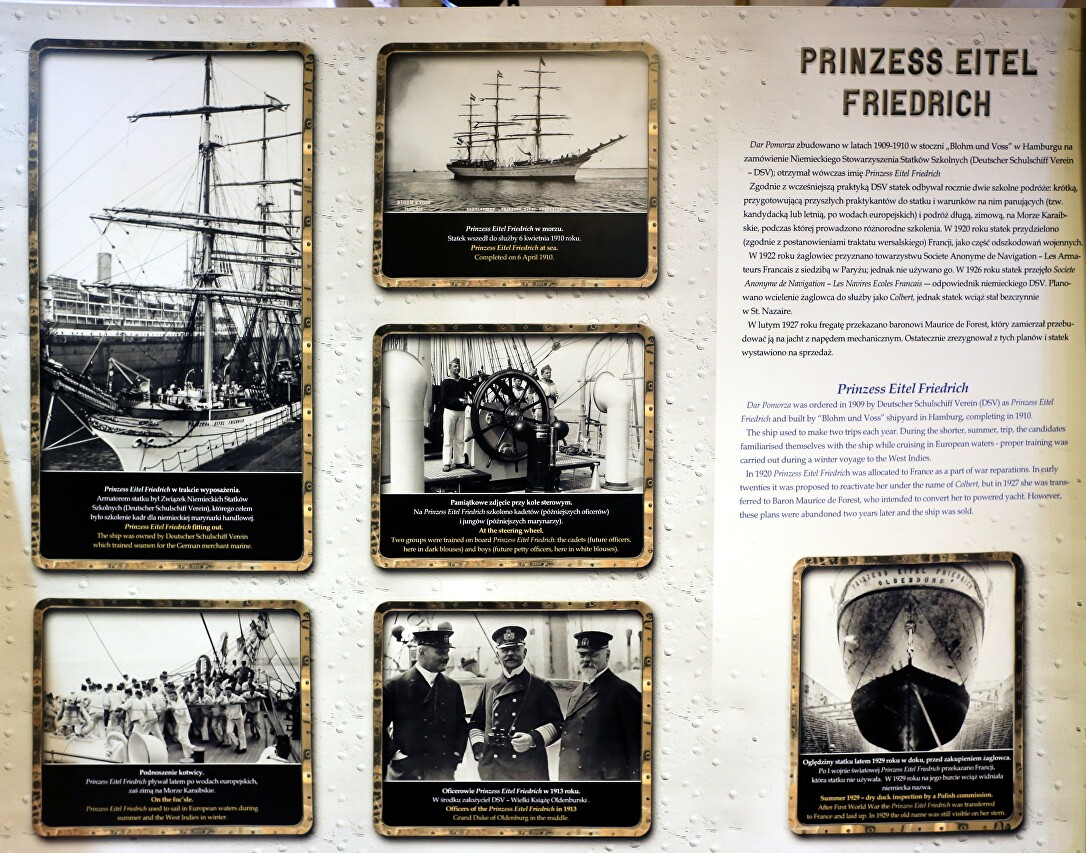 At first, the ship belonged to the shipping joint-stock company Les Armateurs Français, but they did not find a use for it and in 1926 they sold it to the Maritime school in Saint-Nazaire, but even there it was idle. A year later, the ship was purchased by Baron Maurice de forest, who wanted to convert it into a luxury motor yacht, but for some reason changed his mind and put the ship up for sale. In 1929, the sailboat was purchased by the Polish people's Navy Committee (Komitet Floty Narodowej) for 7 thousand British pounds, the deal was exceptionally successful, as it was about 8% of the real value. The ship was named Pomorze and went to a Danish shipyard for repairs. The ship was in poor condition by then, so the first thing she did was go to Denmark for repairs, almost sinking during a storm in the Bay of Biscay. At the shipyard in Nakskov, the ship received new rigging and electrical equipment, and a diesel engine with a propeller was installed. The purchase and repair of the sailboat was funded by public organizations in Pomerania, so it was given the name Dar Pomorza ("Gift of Pomerania"). 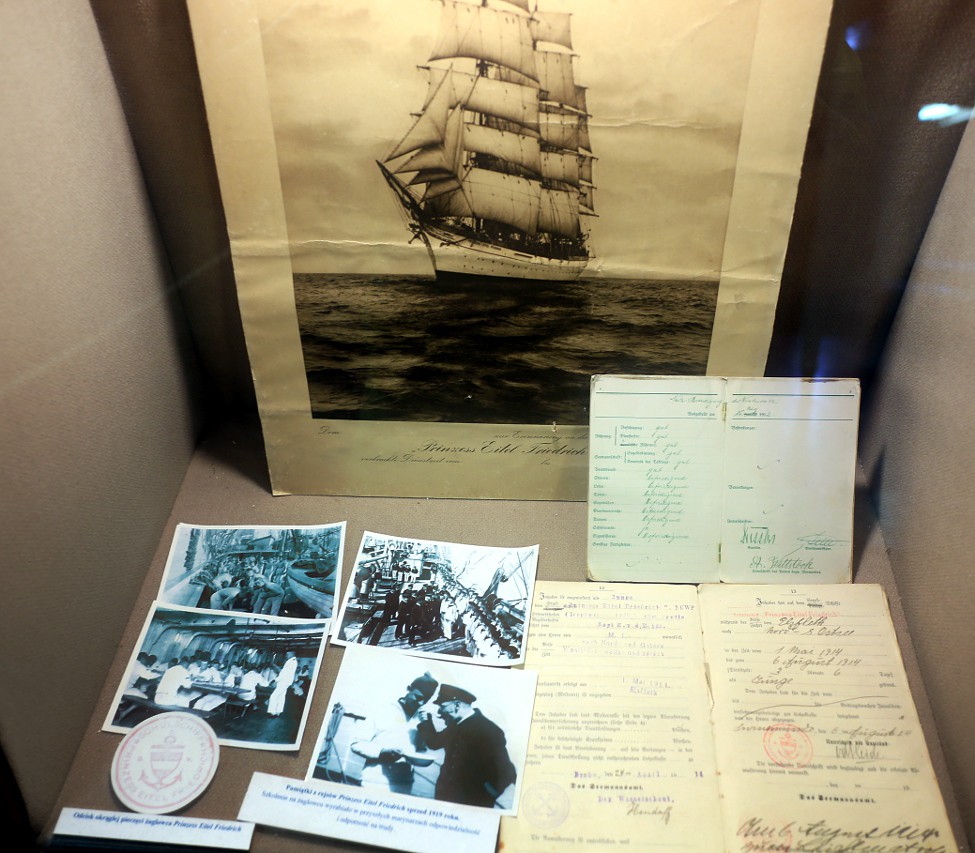 The ship arrived in Gdynia on 19 June 1930, where it replaced the old training ship Lwów. On July 20, Dar Pomorza set out on his first training trip, crossing the equator in November of the following year. In February 1934, he went on a circumnavigation of the world, which lasted almost a year and returned to Gdynia with a pennant on the mast 39 meters long, which meant 39 thousand miles traveled. 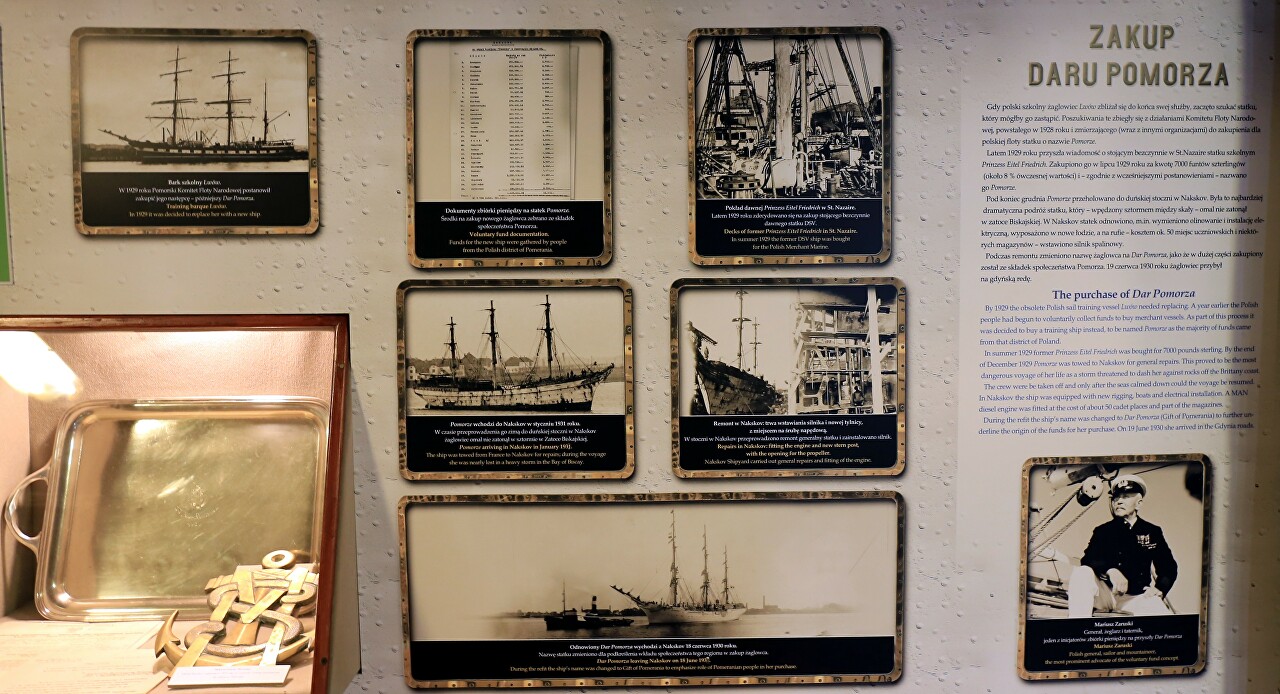 During the German attack on Poland on September 1, 1939, Dar Pomorza was in Stockholm, where he was interned and safely survived the Second world war, returning to Poland in 1945. 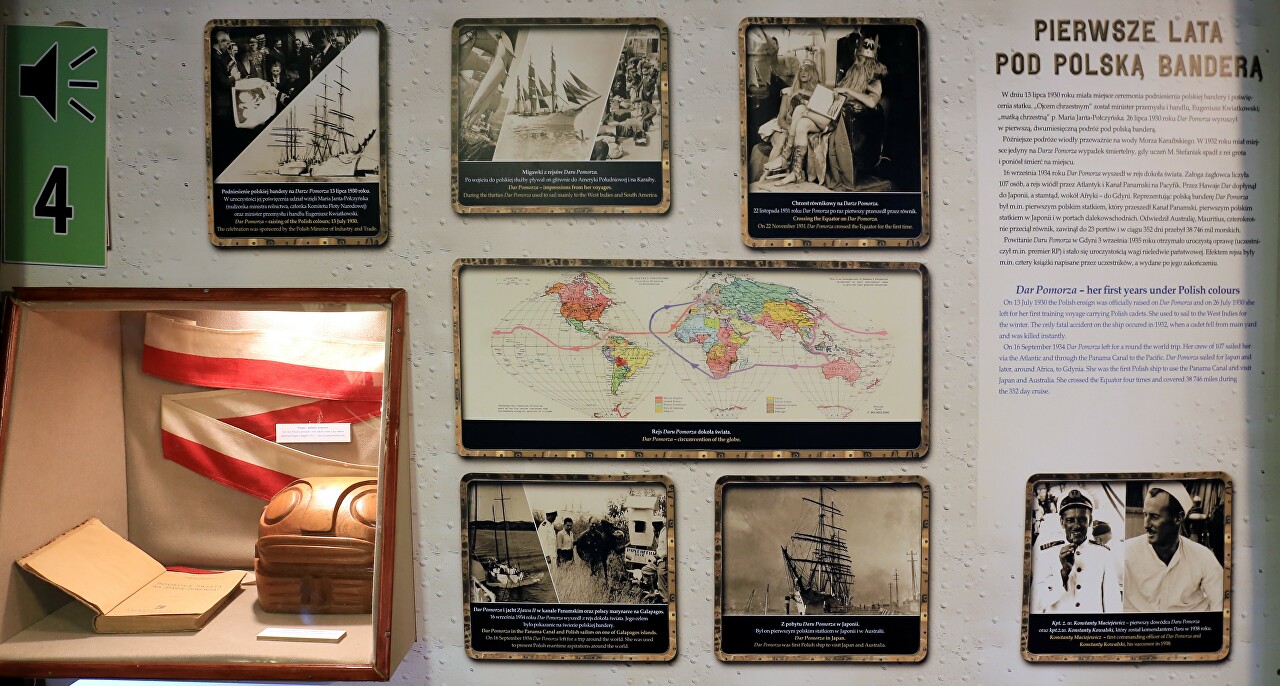 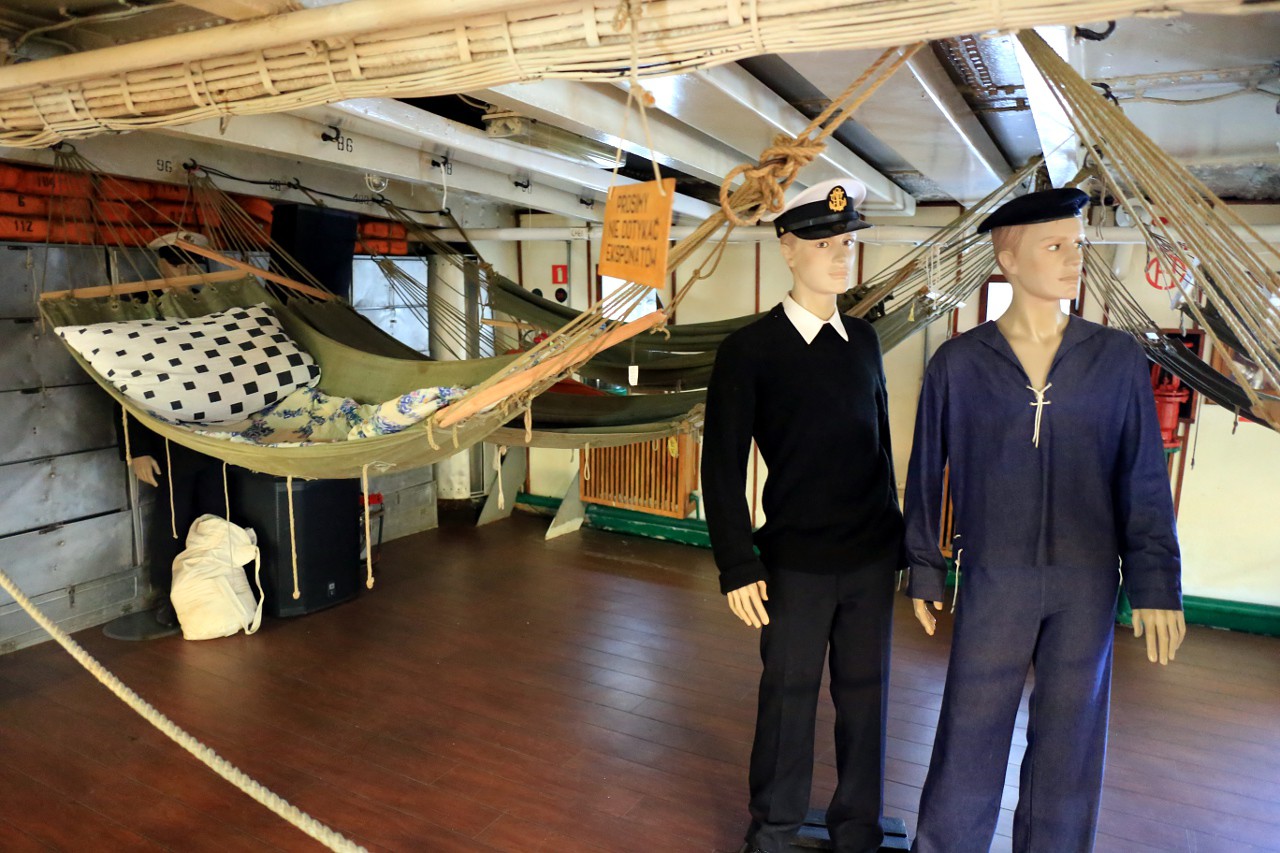 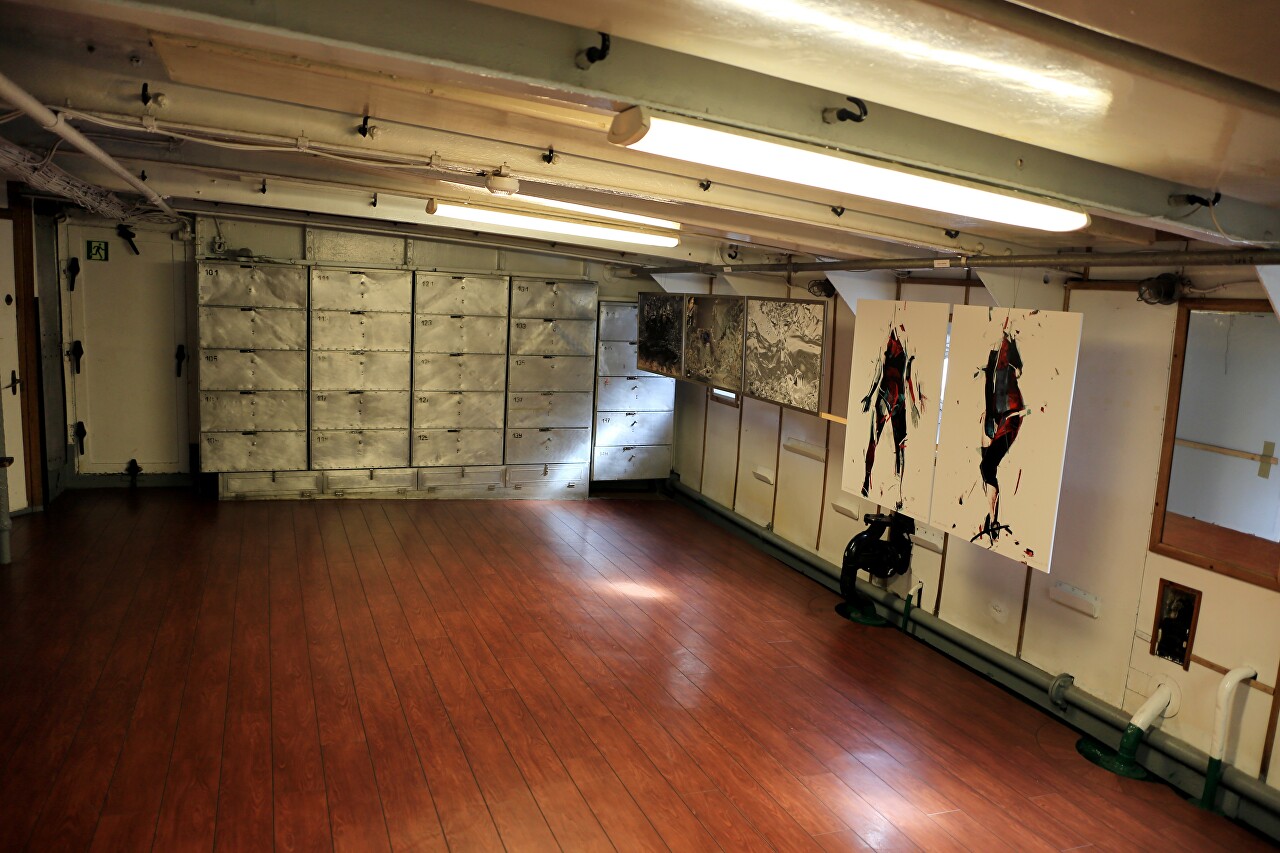 Sewing machine for repairing sails. Future naval officers had to be able to do this too. 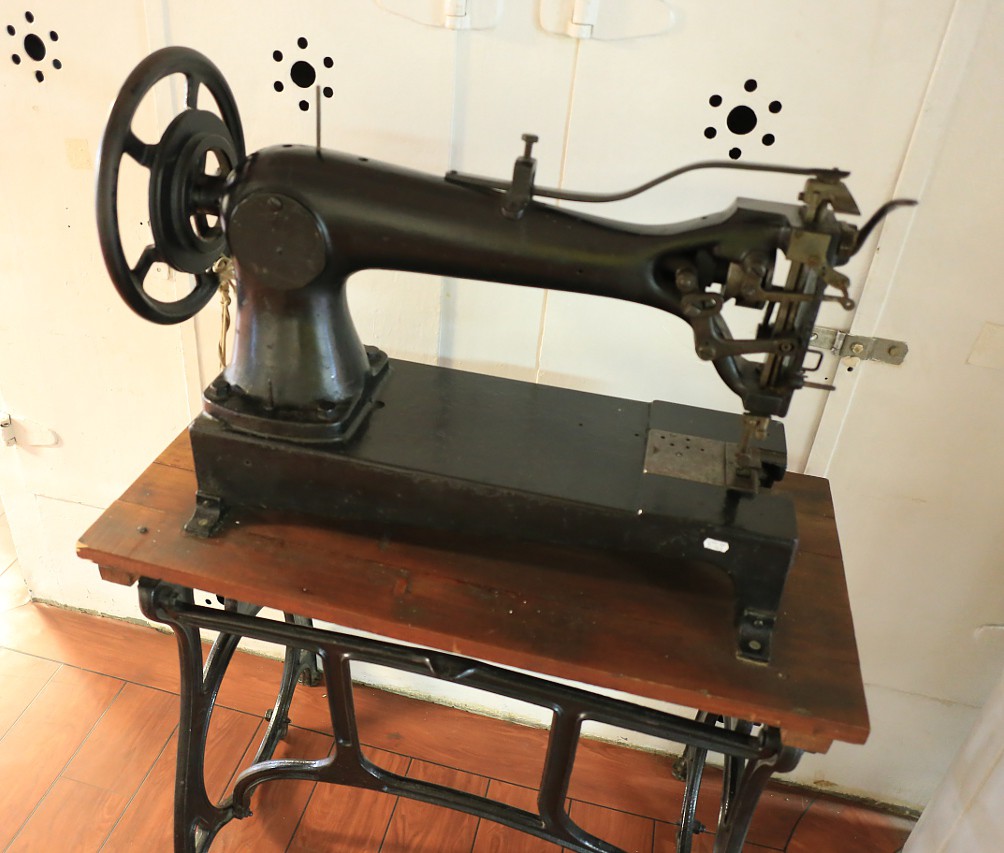 We'll go down to the engine room from twindeck.